The origins of Cocondo can be found in the following four themes: 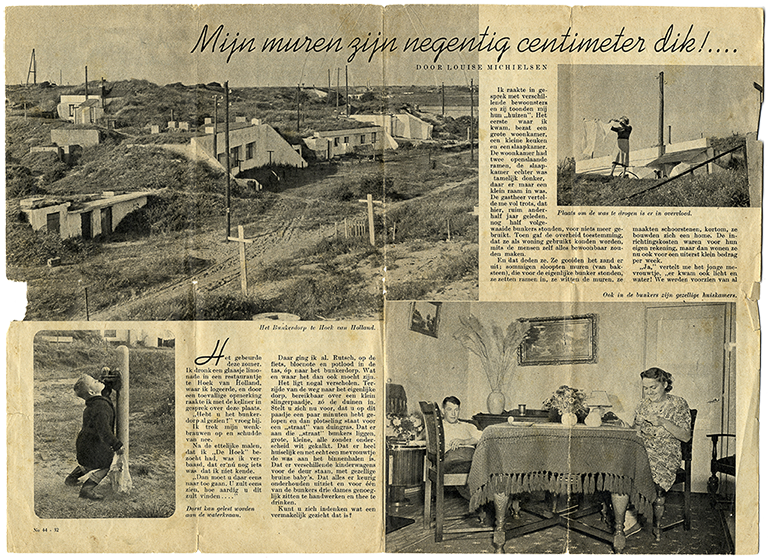 Hidden stories from the reconstruction era

Few people know that after the Dutch liberation hundreds of bunkers were reused as replacement housing. Mrs. Van Dop, as seen in the picture while knitting, even lived in her bunker for 10 years. After raising two children there she never wanted to leave.

Most people associate bunkers with concrete, small spaces and darkness. In the Dutch dunes, however, most bunkers are made of brickwork. They have high ceilings and windows for daylight. During the war they served as bathhouses, canteens and even theatres.

Seaside towns like Hoek van Holland and Zandvoort were evacuated during WWII by the occupying German forces and largely destroyed. After the liberation, the freed citizens returned to a barren landscape. In the dunes however they found dozens of empty bunkers and out of necessity a special new chapter began for both the inhabitants and the area. The bunkers were dug out, painted white, decorated and renamed: Ad Interim, Luctor et Emergo, Elly, Kurie or ‘t Haasje. From there on they served as a house or holiday home.

Many of these bunkers tell not only stories of occupation, but also of liberation and reconstruction. We have been inspired by the stories and shown resilience of people like Mrs. Van Dop. With Cocondo we want to pass these stories on.

The Atlantikwall: The last wall?

Most of these bunkers were built during the Second World War as part of the German Atlantikwall: a 5000 km long defence line along the West European coast, meant to fend off an Allied invasion. The construction of this line was one of the largest building – and later demolition – operations of the 20th century.

The remaining bunkers are a controversial heritage. The Dutch saying ‘Let’s put sand over it’ was put into practice figuratively and literally for a long time.

Right now we can look differently at the impressive architecture of bunkers. These once indestructible buildings now look vulnerable after decades of erosion. The decay exposes a brittle kind of beauty. The era of border protection through defence walls seems to have come to an end.

The Atlantikwall is increasingly being recognised as important for its cultural and historical value. The Dutch Ministry of Education, Culture and Science made an action plan for managing, researching and showing WWII heritage, including the Atlantikwall, to a broad public testifies to this trend.

Despite the change in attitude towards bunkers, many buildings are prone to vandalism. As a result the surrounding nature also suffers. Due to the unregulated trespassing of these protected Natura 2000-areas, the local natural value is under pressure. With Cocondo we are giving the bunkers a new function in a sustainable and ecological way. By making them inhabitable again this automatically creates social control over how the area is handled.

With Cocondo you literally stay under nature in a conscious way. This not only ensures the protection of heritage and nature, but also increases awareness around the preservation of both. Moreover, the proceeds from the rental of the bunkers are all invested in heritage and nature conservation projects. In this way we create the desired balance between experience, protection and financing of nature reserves.

A landscape under pressure

The demand for multi-day coastal recreation continues to grow and is at odds with nature conservation. While the bunkers are practically invisible, the beach cottages popping up along the Dutch coast are very prominent. There is increasing protest against these developments, since the beloved dune landscape is put under pressure. Cocondo offers a camouflaged alternative by making existing buildings suitable for sustainable coastal recreation.

Custom-made on a small scale

The redevelopment of bunkers is a custom-made process. Not every construction is suitable and not every area will benefit from it. That is why it is important that Cocondo is able to work along the entire coast but at the same time keeps operating on a small scale: one at a time. As a result, a network of (invisible) ecological heritage lodges is slowly but surely emerging in the Dutch dunes.

By means of a pilot we first investigate how heritage and nature can reinforce each other. After the first renovation project we will look further into other bunkers and their surroundings.